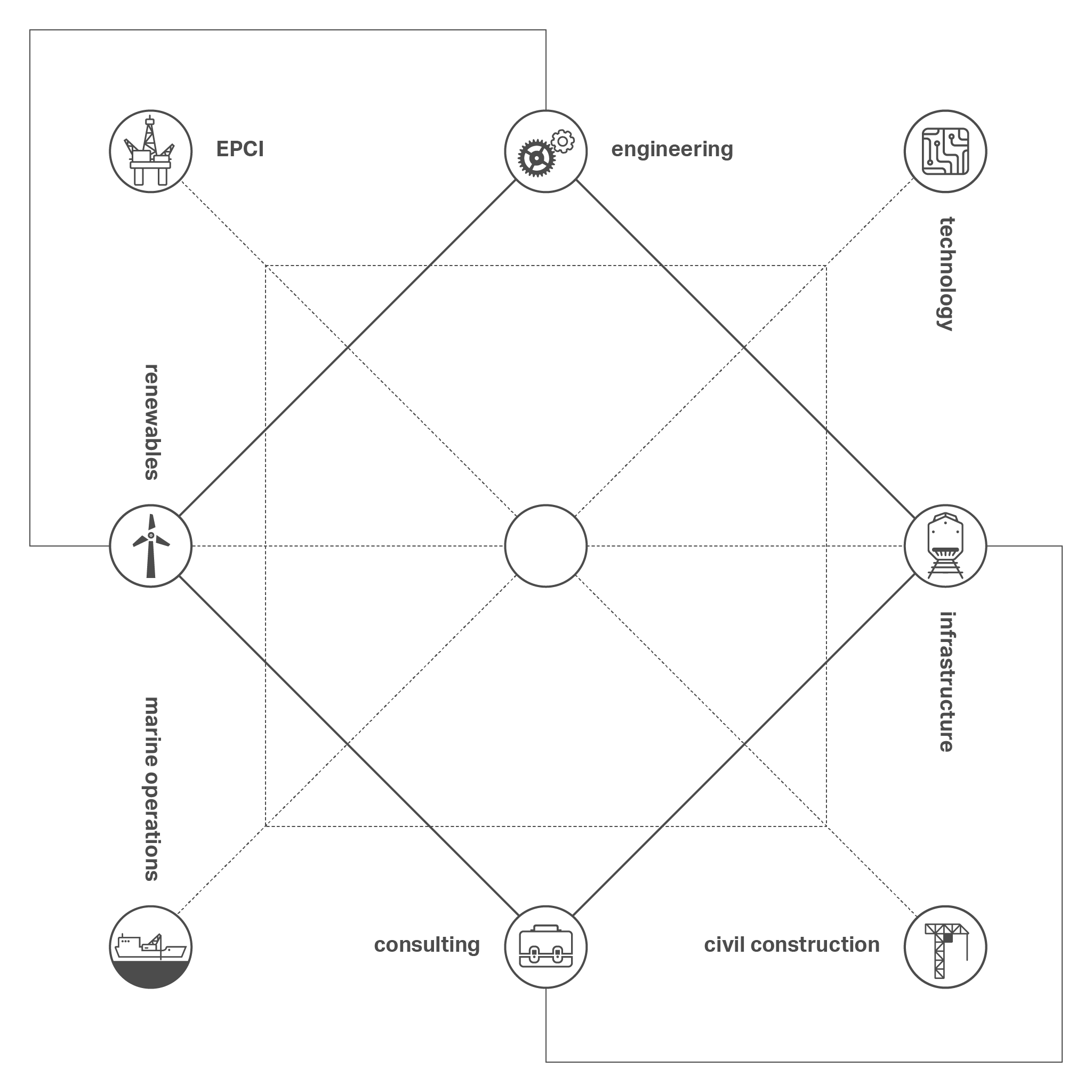 Head Energy was founded in 2010 and has offices in Bergen (HQ), Stavanger, Oslo, Esbjerg, and Krakow.

Our vision is as challenging as it is simple – “One Step Ahead”.

We live by our core values – Responsible • Innovative • Honest • Inclusive – making us a preferred supplier of qualified personnel, technology, projects, services and solutions.

Head Energy is easy to reach and communicate with – we treat our clients and employees in a courteous and respectful manner – contact us today to join our team or try our services.

Founded in Bergen in 2010 as a consulting company serving Oil & Gas customers. Head Energy quickly grew to become a well-respected and trusted supplier of engineering and project management personnel to Norwegian and international projects and customers.

In 2011 we opened our Stavanger-office and in 2013 the current management team in Stavanger joined Head Energy.

In April 2013 we moved to our current headquarters in Bergen, where we have built a professional and service-minded team handling all back-office functions, HSEQ, IT, HR and communication, strongly believing that the quality of our back-office functions should match our front office deliveries.

Frame agreements with Norwegian and international clients, an extensive network and a large pool of highly qualified technical consulting personnel secured a solid base for the further development of the Head Energy Group.

Late 2013 we acquired Multicontrol. A subsea-focused engineering company based in Bergen (NO) and with an engineering-hub in Krakow (PL), handling RLWI operations for Equinor and with expertise in electrical control systems, well systems and electrical and mechanical engineering. The company was renamed Head Energy Multicontrol and is now a vital and profitable part of our operations.

In 2014, our ever-growing Head Energy family became a national EY Entrepreneur of The Year Finalist in Norway.

In 2015, Head Energy entered the offshore wind industry, delivering experienced offshore personnel to large substation-projects in Sweden, Germany and Norway. Head Energy personnel followed the projects all the way from installation and test phases at our clients’ premises to commissioning was concluded offshore.

In 2015 we also launched a new topside engineering focused unit, Head Energy Solve AS. The core team were “handpicked” from other Head Energy departments, had a proven track record, an entrepreneurial mindset and holding clear ideas for simple execution models in modification projects. In 2016, Head Energy Solve was awarded a 10-year frame agreement with Wintershall Norge for modification services on the Brage platform.

Our offshore wind adventure continued in 2016 with the launch of Head Energy Denmark A/S, located in Esbjerg. Head Energy Denmark offers a wide range of technical personnel and Marine Coordination teams to global players in the offshore wind industry. Since then, frame agreements with major international players like Ørsted, Vattenfall and SIEMENS Gamesa have been signed.

During 2016 and 2017 we looked for opportunities within Civil Engineering, focusing on onshore infrastructure and construction. Long-term agreements with both public and private contractors were secured, followed by a steady delivery of technical personnel. In 2018, Head Energy Infra AS was launched to spearhead our efforts, signaling our ambitions to create a larger Civil Engineering footprint. Head Energy Infra has developed rapidly and was awarded a frame agreement with Nye Veier (Road Construction) in December 2018.

All operating units are profitable, well-functioning and staffed with motivated and high performing employees. We are proud of our team and have high hopes for the years ahead.

We have set the following targets for our business:

Head Energy AS and Head Energy Multicontrol AS have the following certifications: 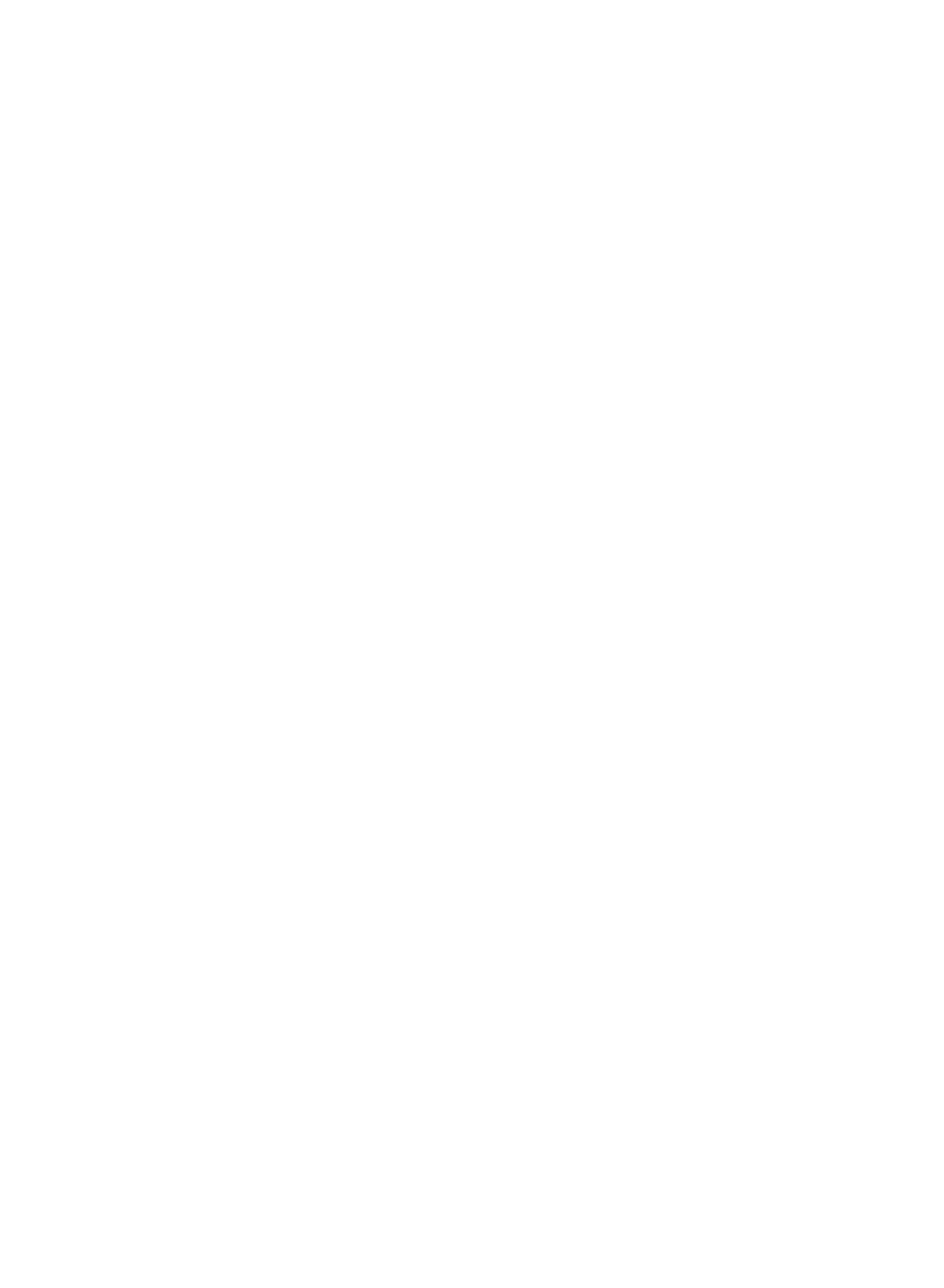 We take pride in our corporate culture based on trust, openness and diversity. Our staff counts approximately 450 talented individuals. 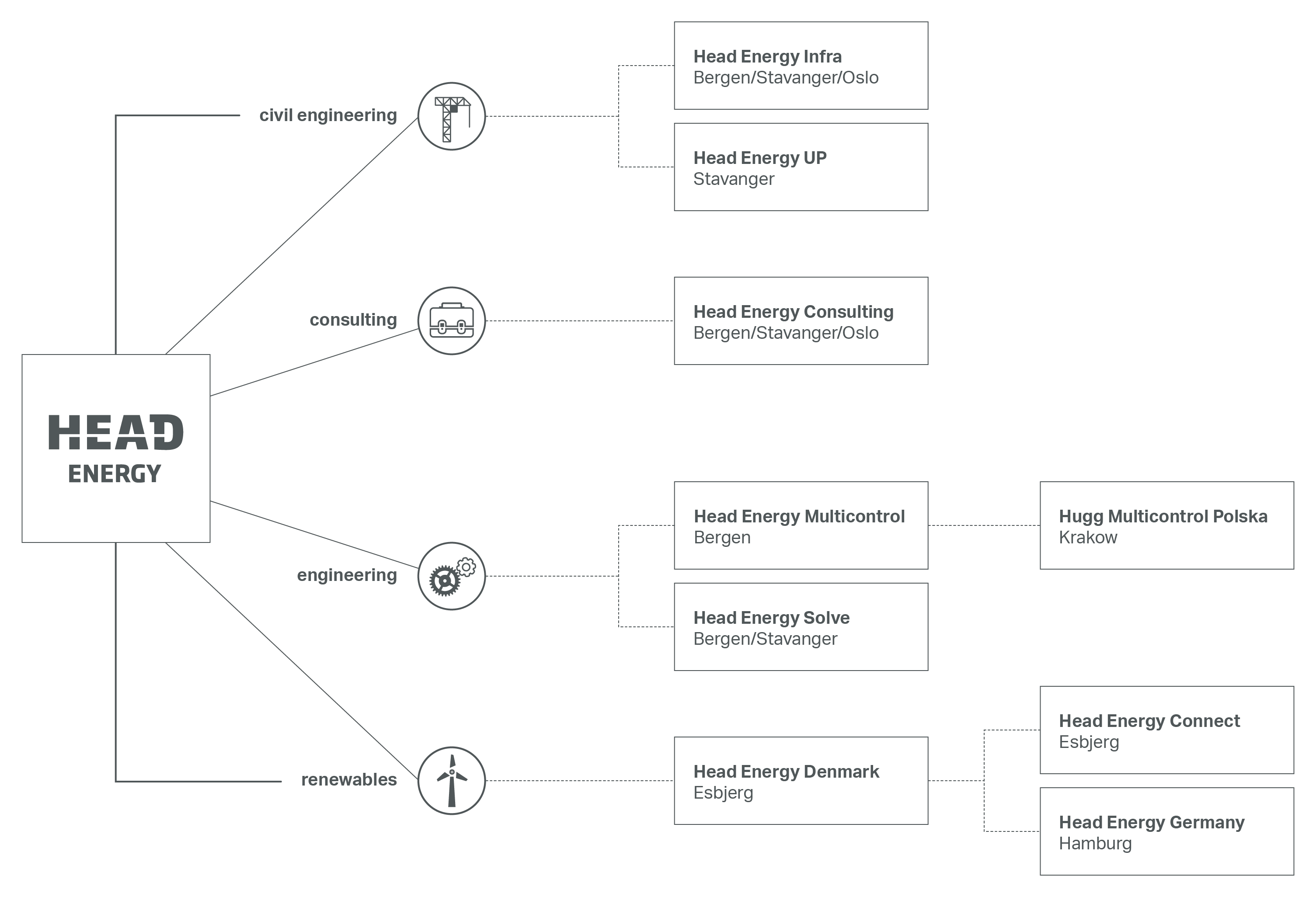 From carbon to carbon-free

Though our business has been resting largely on the oil industry, we acknowledge that we have a role to play in the joint battle against climate change. We believe in the future of green energy solutions such as wind- and solar power as well as sustainable and energy effective construction projects, electrification, public transportation and re-use and recycling of production material.

We believe that greener solutions are not only necessary, but also the future of a profitable energy business setup. Our long-term ambition is a minimum 50 percent non-oil orderbook, growing our business within offshore wind, infrastructure and construction. Our goal is to connect the Scandinavian offshore experience with a renewable energy future.

Head Energy and our employees shall be a positive factor in and around our premises, be gentle and courteous towards neighbors and stakeholders, promote a positive working environment for all and support initiatives that promote well-being, physical and mental health.

Head Energy shall promote and support initiatives within education, culture and sports for youth in our communities.

Head Energy has a clear ethical framework for our business, our employees and how we treat our clients, partners, employees and other stakeholders.

Our ethical framework and code of conduct are presented to all new employees and always accessible through our internal platforms.

We believe in transparency, honesty and pro-active behavior in establishing trust between the company and all our stakeholders.

Head Energy has a sponsorship program intended to support culture and sports for kids and youth related to Head Energy employees. Annually we also support a selection of local initiatives, events and clubs close to our geographical locations.

All applications must be sent to communications@headenergy.no.